Please see the attached video.
Even if phase randomization is turned off, the sound changes attack with each note hit in Reaper. This is very annoying especially for making kicks or short sounds … is it a bug?

You have negative velocity tracking on, is that the issue?

I’m trying to change the wavetables and parameters including Velocity, Envelopes, Oversampling, Phase Randomization to zero, and all the Voice parameters but the problem continues!

So the negative vel track was the issue in the first video right?

The velocity i tried to change it negative and positive but the problem still exists. I have made several attempts and still have not been able to solve the problem …
However, i attach the preset, I would be curious to see if this problem is also present to other users who use Reaper or not.Bug.vital (330.6 KB)

I just tried also with Ableton instead of Reaper by loading my own preset and the problem persists. I deduce that the problem is in the synth and not in the DAW…

@Tytel this synth is really fantastic and I already love it madly but unfortunately this problem for me is devastating… If anyone else has this problem please write it here, thanks to all for the help!

You keep changing the preset so I can’t follow what the issue is.
The videos you have velocity tracking on the preset you uploaded doesn’t.

If you have a preset and a video to match that would help.

The problem is very simple, maybe I expressed myself badly for my bad English. Each time the preset is played (either via MIDI or directly in PLAY from the sequencer) it always changes in the attack phase. Instead, it should always sound the same. However, soon i will make a more useful video.

There’s a very very small amount Delay on envelope 1, is that what you’re talking about?

Looking at it again this is probably your issue. Just set the delay to 0 on env 1 (it looks like 0 right now but it’s not)

You’re right, it was actually the only knob I hadn’t considered, my mistake! Last two things:

Thanks again for your patience and congratulations for this great synth, by now I’m just using this for everything!

Regarding your second question, I know a way to change the default preset of every synth, if you’re using FL Studio
Once you configured vital to your liking, click save preset as 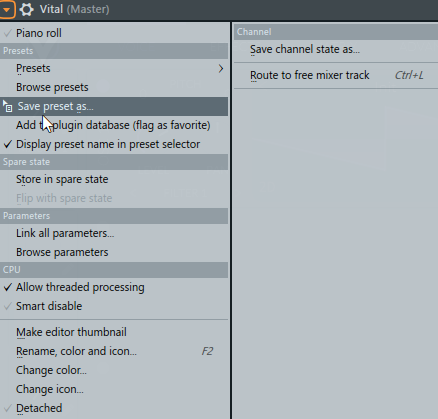 then choose a name like default.fst and remember where you saved it because you’ll need to copy that
Next copy the default.fst preset that you made and go to your plugin database folder, should be located in …\Users[your computer account]\Documents\Image-Line\FL Studio\Presets\Plugin database\Generators, and there you can paste the .fst file, it’ll basically add the preset as a new synth that’ll show up in the plugin picker menu
Then you can rename that to be Vital.fst and you can delete the previous Vital.fst (so it’ll not show itself twice) and that’s it

and remember where you saved it because you’ll need to copy that
Next copy the default.fst preset that you made and go to your plugin database folder, should be located in …\Users[your computer account]\Documents\Image-Line\FL Studio\Presets\Plugin database\Generators, and there you can paste the .fst file, it’ll basically add the preset as a new synth that’ll show up in the plugin picker menu
Then you can rename that to be Vital.fst and you can delete the previous Vital.fst (so it’ll not show itself twice) and that’s it

Thank you very much you have been very helpful, I will try this on Reaper!

Hello all,
I can confirm that I have experienced something similar (seemingly random phase at the envelope opening). It is not reaper related.
I tried to track the bug down but was never able to reproduce it in such a way I could present a patch and a video showing the problem.
Later, I noticed that the envelopes and LFO knobs are very very sensitive to slight mouse movement when their value are set close to zero. And it is hard to see if they are indeed at zero or not. My workaround is to use the mouse wheel when I need to set something at zero.
I’m still having an eye on a potential bug behind this but my gut feeling is that there is not. However it could be nice to increase the precision of the displayed values to 4 or 5 decimals when the knob is set under a millisecond.

Thanks for the tip. In fact it would be useful for example that just above zero on the knobs there was a minor sensitivity or in any case find a way to improve this thing.

Honestly, I’m just double-clicking the knob and typing zero manually, a lot easier
And regarding the phase problem, I don’t know if you guys saw that but in the phase tab, there are 2 sliders, 1 for the phase offset and another for the phase randomness

Hey thanks for the help, but yeah we know this.
Also, you might be confused here because double-clicking in Vital does not open the ‘type in value’ box. You have to right click to do this. It’s the Melda plugins that do it via double-click.

I have seen the same apparent random phase behavior. A bit unsure still if it also could be the envelope not resetting properly. It is troublesome for sounds with a sharp attack (bases, kick drums, clicks).

It occurs both with the oscillator and sample as sound source (try both, e.g. with a hihat pattern, in the attached preset)BA Envelope Issue.vital (131.7 KB)

This is exactly the point!

After several attempts I can finally confirm that sometimes lowering the Deelay knob by moving the mouse does not solve the problem but with a double click it does!

For me, an update that improves the handling of the knob would be welcome to avoid this annoying problem.

I made another attempt by activating the distortion and although the Phase Randomization and Deelay values are at 0, the problem reoccurred … Can anyone confirm using my attached preset? Thanks all.

I can verify that the issue in my example was resolved by ensuring that the pre-delay on the envelope was set to zero by double clicking on it.

I could also verify that the “inconsistent transient” behaviour was reintroduced by modulating the distortion effect in your example g.lorenzo.pro, despite the Delay parameter being set to 0 for both envelopes.

Less importantly, but if someone else wants to check, the example was pretty aggravating to my hearing and a bit difficult to hear, so I changed it slightly to one with shorter decay times - and a visualisation of the shifting frequency response by adding an eq after the distortion to show the spectrum (attached)