Hi! I’m new to Vital and look very much forward to using it.

However, as of yet, I have not been able to load it into my LMMS. I’m not sure how many users here, if any, use Vital on LMMS. The problem is that neither the DLL nor EXE files load when I select them. Once selected my DAW will freeze for 2 seconds, then return with no loaded VST. I’m unsure how to fix this problem. Can anyone help?

Can we get a bit more information? Such as OS and Vital version number?
I’m able to drag and drop Vital in from my file browser with no issues what so ever.

I run on Linux, and I have the latest version of Vital. I tried the drag and drop but seems like there’s nowhere to drop it.

If the file has a little “V” icon next to it, you should be able to just drag and drop it onto the main song writing window.

I’ve dragged the likes of DLL and EXE files, both supported by LMMS, but it won’t let me drop the file into the DAW.

Have you tried manually navigating to the vst through VeSTige?

I have, but after I select the DLL, LMMS will freeze for a few moments, then unfreeze without loading Vital.

I use vital on LMMS and had the same problem but fixed it today. I was using and old version of LMMS that I downloaded a year or two ago and never updated it. so I went to the LMMS website and download the latest stable version which was LMMS 1.2.2 for Windows 64-bit. Idk if it has to be on a 64-bit system or needs to be windows or even if it only works on the version 1.2.2 of LMMS. all I know is that Vital version 1.0.7 works with LMMS 1.2.2 for Windows 64-bit.
hope this helps you if you still haven’t got it working or helps someone else.

Hi!
Linux does not natively support .dll or .exe files, these are mostly used by windows. However, Vital runs on Linux as a vst3 plugin. (The file extension in this case will be “.so”, which is sort of like Linux’s version of a .dll) There is no need to use Vestige or WINE.

LMMS doesn’t support VST3 plugins, however it can still run Vital through an instrument called “Carla Rack”. If you don’t have this option in LMMS’ instruments, use your package manager in your Linux distribution to install carla. Next time you run LMMS, you should see a “Carla Rack” and “Carla Patchbay” instrument

The Carla Rack can load VST3 and LV2 plugins, and you can use that to run Vital. Simply dragging file file into LMMS will not work, you must load it through Carla

Can you tell me how to use it? I’ve tried everything including adding the directory where the .so files are, but still it refuses to work.

I added the “VitalBinaries” directory into the folder where Carla was searching for VST3 plugins. Then I rebooted Carla. Then I used the “Refresh” option under "Add Plugins’

No matter what, Carla won’t read Vital. I found it won’t load my KSHMR Essential Kick even though it too is a .vst3 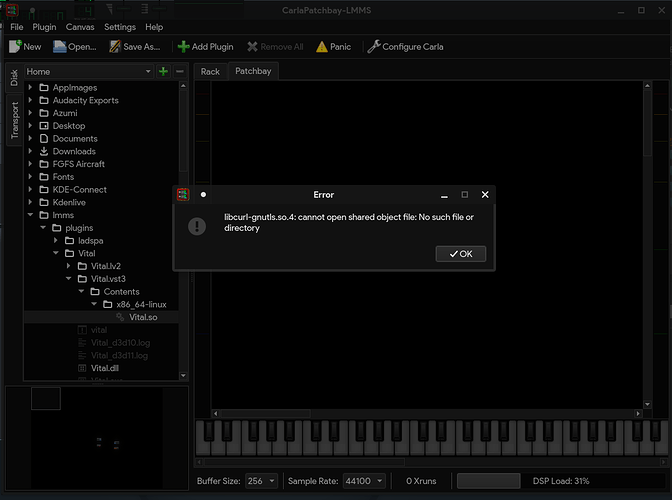 You are missing a dependency i.e libcurl-gnutils . Vital AFAIK uses the curl lib to ping the server for License details. I think the command ’ sudo apt install curl ’ from the terminal should pull in the required packages.

what is your Linux distro_

@POLO It could be that you have an older version of curl installed, or if you have the right version it is not being found in your search path ( I remember having such issues with a license on another Linux VST, iirc the author actually changed his code to suit a few of us that were complaining ).

Anyway please paste the output of the command in a terminal

I have the exact very same problem, so first of all thanks for all of your answers => IT NOW WORKS \o/

And not with ubuntu based distro !

2/ I was at the same step as @POLO 's with his error dialog so I continue the thread with answer to the question of @chrissy.mc.1 (and reklamchef) :

3/ I noticed that I do not have the libcurl-gnutls.so.4 the error dialog was throwing back.

Then I installed it : sudo pacman -S libcurl-gnutls
(note it’s not gnutils but gnutls)

4/ Then I restarted lmms from the last App image downloaded from the official website.
Note that during my effort to make it works I previously performed a full system update which is I guess always a good idea.

So I was able to look for my Vital.so library (from the archive I downloaded from Vital website) and double click on it.

5/ This done, on the main frame of the CarlaRack window, you have this gearwheel-like configuration icon (at the right of the on/off-like button) : you can click on it

7/ then it downloaded some stuffs through a popup and made an “Install” button available, click on it

8/ And then your Vital plugin is available

I still have to discover how all those Vital, Carla and Lmms work together, and hope I won’t have any other crashes look alike issues, but having his work is a great achievement ^^

Thanks again to every body !

Apprt from this Carla usage, some other informations about my experience: