Had a version 1.0.7. (version “Plus”). Even though I had “auto-update” option enabled, the plugin did not update itself (tried both the VST and standalone) and also did not auto download/update preset packs (im sure that both the auto-update and preset downloading was functional in version 1.0.5. I tried logout and login and still nothing.
So I updated the plugin manually (to 1.0.8), but again, the presets were not downloading automatically.
I got custum location for the presets (on disk E:/) but this was never a problem before.
I know I can update and download presets manually, but still - Is there something I can do to make this functional?

“Auto Update” was changed to “Check for Updates”. It’s not supposed to auto update just let you know there is an update. I think Matt said that feature is not functioning yet. I’ve been using the latest version for quite some time so I wouldn’t know if Check for Updates is working yet or not. 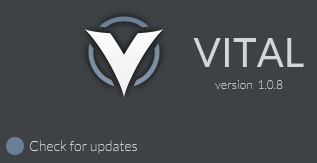 Okay, thanks for the response - of course by “auto-update” option I meant I had “Check for Updates” enabled, so this one does not work for anyone :). But still downloading the preset packs does not work…