I’m testing 1.5.1 beta in MacOS with my M1 MBA, found some stuff, nothing major but just wanted to let you know in case you might want to check these issues:

Yeah these issues were in the last build also. 1 and 3 are from graphics optimizations though I think I could easily fix the delay to have more bars now I have a faster rendering engine.

2 is actually how big the amplitude gets so it’s accurate but just has a larger amplitude than the display. The reason for this is normalization I’m doing (to keep the filter from making the signal really quiet) and the current phases of the waveforms harmonics. I don’t have a fix off hand for this but I’ve thought about some ways to make it look better, though I haven’t settled on anything yet.

4 I should definitely fix…

To be honest, 2 (the waveform amplitude) makes a lot of sense and I thought it would be something like that, just that it’s a bit weird right now. Maybe it’s because the name is drawn behind the waveform? If it was drawn over it, it would give a better depth feeling and make more sense. Just nitpicking though.

That’s all, thanks a lot for the work Matt. The change with this new version is really great, the synth is responsive AF now.

Oh yeah I didn’t realize the waveform was drawing above the text. I’ll switch that (and fix the reverb labels).

Is it to old or am I doing something wrong?

I’m pretty sure the skin format has changed so you might need to change some stuff on your skin file (or rework it from scratch?).

Oh my… thnx for your quick answer. I am a noob in these things. I have downloaded the pro skin, is that the one I should place somewhere??

Oh and in black I mean totally black. No GUI at all. I hear the sound of the initial saw. And I don’t know where to find or change a skin file.

I’m not that knowledgeable about skins, so maybe if you can’t see anything then it’s a graphics engine problem? @Tytel

I have reinstalled the 1.07 for now and hopefully the new 1.51 will work later. 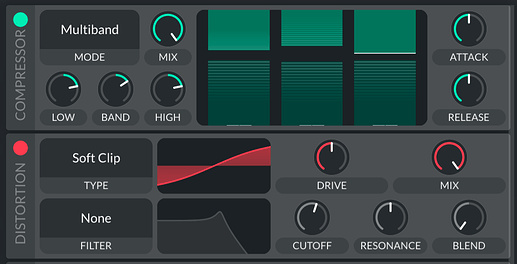 56%20PM1108×566 77.6 KB
I noticed the Compressor label isn’t quite as centered as the other effects titles and is pressed against the power button. If it’s an easy fix it would introduce an even cleaner interface for users with obsessive compulsive attributes.

I also noticed while checking out the theme editor there isn’t a way to close it without exiting Vital altogether.

Honestly these imperfections are insignificant, but I thought it’s worth letting you know. You’ve coded an impressive piece of software Matt, well done.

Hi Matt, there is a small issue too with the Distortion effect module, when choosing Downsample mode, the Drive button which is used to decrease the sample rate displays values in “db”, that’s a bit odd

Have a nice day and thanks a lot for this wonderful synth.