Hello everyone.
I’m making a song right now with almost 180 tracks, in which half of them is Vital.
I also reinstalled Windows recently.
Whenever I try load the project and it’s loading, REAPER just disappear out of nowhere or report “This application has requested the Runtime to terminate it in an unusual way. Please contact applications support team.”.
Please help me out.

I appreciate all helps and feedbacks. Thank you.

I would expect any piece of software to crash after attempting to run that combination at one time. Isn’t that a bit extreme? Maybe bouncing some of those tracks to audio would help.

I already did it but I want to create a high-quality export of the song instead of adding an audio file on top of it. I really appreciate the idea though.

What are your specs?! 90 instances of Vital? Even with oversampling at 1x, what machine could even attempt to handle that? I’d suggest freezing the tracks; as long as their WAV’s you’re not loosing any kind of quality. You’re going to have to load the project with FX disabled at the start and then slowly introduce the tracks relevant to the freezing.

I don’t know how you managed to rack up 90 Vitals, maybe learn a slightly more economical synth in the future?

maybe some machine elves in another dimension are doing this because they’re worried you’re going to undo some of their matrix work?

Just a Pentium G3250 and 4GBs of RAM. And it ran heavier projects before. For now, I’ve successfully moved all of them into one project file and set them offline when loading, waiting to bounce them out into an audio file. Also, FYI, REAPER can stop the tracks to use CPU by muting them, so most of the time it doesn’t use my whole CPU when making a song.

I use that many Vitals because I got used to it now. If I have a chance, I would get something else. Thanks for the reply.

Another thing, the most recent Reaper update added auto-bypass for fx, consider adding that to your arsenal to tackle whatever ungodly behemoth you seem to be facing.

I’d be shocked if it could run 9 without choking.

Not simultaneously. I only turn them all on at once when rendering a song. And if the patch is not too complex, it can do 9 at once without choking.

UPDATE: Managed to bounce the heaviest part to an audio file and put it in my main project and set the instances offline. Thanks for all the replies so far, although I want to find a way to prevent this from happening again.

I want to find a way to prevent this from happening again.

Buy a new computer. Sorry I know not everyone can afford to do so but sometimes that’s the only answer none the less.

I’m looking to update my studio system because it’s getting a bit long in the tooth but compare the CPU benchmark scores and specs for our two CPUs. Time to upgrade. 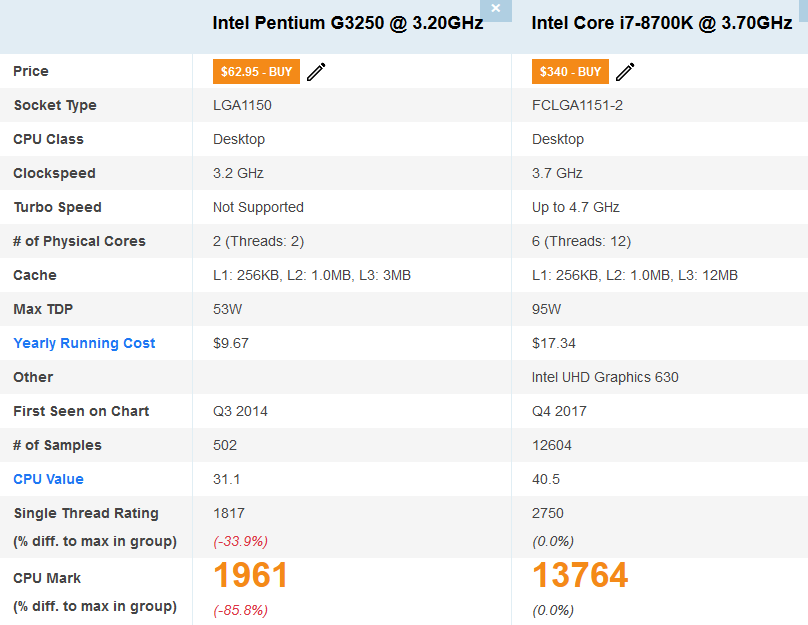 That seems good. I will upgrade my computer when I have the chance. Thanks for the reply!