How many presets are included with subscription version? Does it include the 400 that come with the pro version?

I dont think so. Subscription option states that you get $5 / month credit in store that builds up and you can use to buy the plus or pro versions, and that you get periodic preset packs only available to subscribers.

Hi!
I thought also that subscribers had the full preset factory but it’s not that at all. What you get is the same version as the free version with no added presets. Subscription is more to be considered as a rent-to-own plan for 16 months (normally) with premium support and a bunch of presets from time to time to remember us that we are not free users. I see that as a supporting fee for further development with no loss of money if you keep the plan or upgrade later.

I have the subscription version also. It may be early days, but I’m not sure how we get to see the $5/month credit, and how we can spend it. I presume there is (or will be) a ‘store’ of sorts accessible in our account. (?)

Not yet indeed! I had the free version first & then I subscribed: it didn’t change anything.

Hmm, some complained that nothing changed after upgrade to pro.

So the quesion is if it is a bug or by design? The homepage lists no 400 presets under the subscription.

Sure my first feeling was the same, a subscriber should get all. 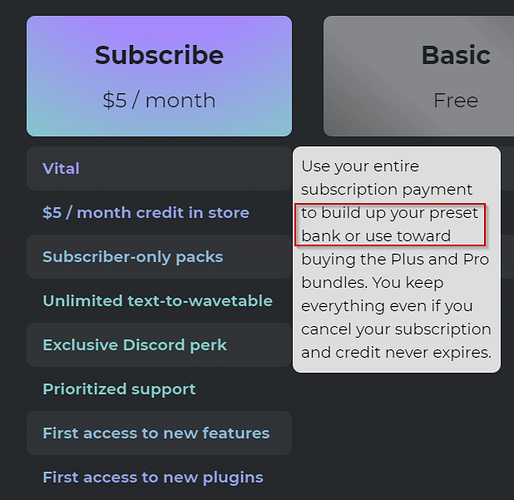 That is the answer. There are no more presets yet. Hmm, not so nice as a subscriber shows a kind of loyality.

From what i can see you get the same patches as the free version, plus a few extra (you can recognize them because they are stored inside folders named “Subscribers” under certain “Presets” folders in the “Vital” directory on windows.

In my installations i can see a total of 14 patches under those directories. These 14 extra presets should be the initial difference between subscriptions and the free version

So my personal decission is now to go for plus as I want presets now. Maybe later, if I will use it often, I go for pro.

I guess there will be a shop in the future to buy presets as well.

It looks like there will be. Right now if you open presets from certain authors in the browser, under the description table you can see a button “Get more presets by…” that takes you to an under-construction Vital Store page on Vital’s website, with an “store available soon!” text in it for now.

I feel the same, we should get more but on the other hand if you or i pay one months contribution and then stop you will have the pro version for 5 bucks, thats not right also.

I think it is fine. 5 dollars each month to build up credit with some extra perks compared to the free version.

Since at the moment there are little to no benefits to having a subscription plan, I have a suggestion where users on the subscription plan can share their presets, and all shared presets would be accessible within a separate folder, where other users can rate and like them. This way it builds up to this massive user-generated preset library where everyone contributes. Users with high ratings would qualify for additional points which they can spend on whatever is available or even the pro plan.

I also had the idea that a subscription would get me all the presets and perks but I kept the presets and wave tables that came with my Plus version. Reading the above discussion makes things clear…
I hope there will be an upgrade plan from Plus to Pro also…

Besides the whole subscription confusion, I do like the synth and I hope it’s community will flourish. It’s not a bad thing supporting Matt for creating such a great new Synth.

Finally, I canceled my subscription today because, besides becoming a supporter and rent to own the plugin, there is not enough advantages of being a non-free user. There are too few presets, in my opinion and I’m not this very professional sound designer who will spend days creating “never heard before sounds”. I like to tweak presets and can reach good results with it, but I’m not a presets creator. That’s why I have no clue at keeping my subscription alive for the moment. I’ll come back later or will buy the full version occasionally.
Till then I wish you all a lot of fun with this piece of software.