Not letting me use vital in Ableton

I’ve dowloaded it and redownladed it and every time I try to use it, it says failed to create audio unit. Has anyone else ran Into this issue yet?

what macosx?
There is a new/latest version in “account” :

For some reason this keeps popping up 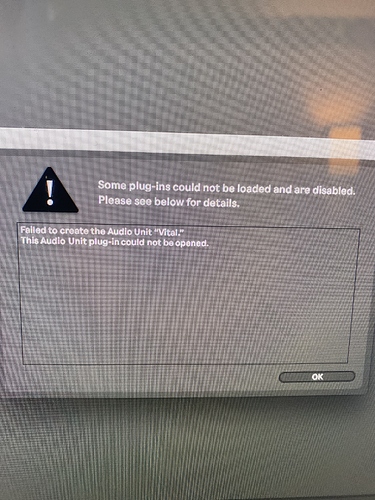 Use the vst3 version. it solved my issue.

Greetings from Toronto. I am having the same issue, I dowloaded the Vital installer for Mac and ran it, It created an AU but when I try to load it Live says “Failed to create the audio unit Vital”. Someone on this forum suggested using the VST3 version, but the installer did not install one. There is no opportunity to choose what formats are installed when you run the installer, which I have done several more times with the same results. Using OS 10.11.6 & Live 10.1.30. I look forward to using Vital soon!

Ohh, what about the standalone version? (in the meantime… to play and have fun)

Yep that’s unfortunately what’s happening to me too. It’s not even giving me the option to be able to switch to vst3 and the stand alone version for me at least crashes the second I put my login info in.

Unfortunately with that the program crashes the second I put my login info in. So right now that’s not even an option. Hopefully this gets resolved soon because I was so excited to try it out!

Hey Ryan, yes it crashes if you try to log in to the stand alone version. But you don’t have to log in to use it. Just click on the Vital GUI and the prompt goes away.

These ‘crashing on login’ issues sound like you’re running MacOS 10.11 (is that right?). I only support 10.12 and later. If you’re on a later OS let me know and I’ll look more into this.

Ok yea I think that’s it. I’ll update it tn. So in the stand alone version for rn is there any way to take what I’m making and put it into ableton or is that only just for making sounds

Greetings from Toronto. OS 10.11.6 user here. Yes Ableton fails to create the Audio Unit “Vital”. Others here suggested that the VST3 version would work, but it doesn’t appear to have installed a VST3 version, and I wasn’t given any option to choose which formats were installed.

Any chance of this being resolved? I want Vital but I’m not ready to upgrade my OS at this point in time.

Thank you for that suggestion, I didn’t realize it installed a stand-alone version but yes it’s there, I’ll check it out!