New user here, how do I save to a WAV format?

Hello everyone, I have Googled searched this and cannot find a direct answer, so I bring question to you.

I made a track using Vital and proceeded to save it, but it only saves within Vital, how can I save it as a WAV file?

Ehhhhhhm, you mean you used Vital as a sequencer? If you made your track inside a DAW, then you should search how to render/mixdown the song in it. Vital itself is just a synth and has nothing to do with rendering to audio formats.

Thank you for the response. I’m very new to DAWs and digital synths, I apologize if I’m not making sense.

Right now I’m using Vital without a DAW. I loaded in a field recording sound and warped it, etc., into something I like. I then saved it (but maybe I just saved it as a preset?) Should I open Vital as a plug-in on my DAW next time? On that note, I use Audacity and I couldn’t find a Vital plug-in for it. I did watch a few Vital YT tutorial videos but no one talked about how to save your work when your done.

You can save a Wavetable you’ve created as a .wav file in the WT Editor:

Nice! Thank you, that’s exactly what I want, but where is the Wavetable editor? At the top of my screen there is the 3 horizontal lines and when I press on that it shows importing/exporting or saving presets and browsing presets. And then to the left of the three lines it shows an arrow pointing down and when I press that it does allow me to save, but there are no options export as a wave file. I’m using the free version if that makes any difference. Again, thank you for trying to help.

but where is the Wavetable editor? 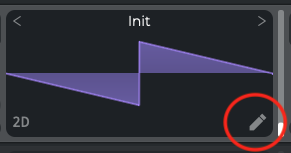 That did it! Thank you so much!

Would you say ideally I should use Vital as a plug-in inside a DAW? After you showed me that I’m realizing I can only save one sound (out of say 3 sounds) at a time. But it seems it would be common to use different sounds together to make one combined sound. It doesn’t seem like there is a way to save the combined end product. If that makes sense.

synth plugins are meant to be used inside a DAW. Load your synth on one or more tracks create your music and export the result as audio (eg in wav format). If you use your synth as standalone, you can only tweak it to make new sounds and then save them as patches so you can use them later

I think you’re confusing making sounds and making music. You use Vital to make sounds (called patches or presets) then you use those sounds to create music. If you are performing music live then you could use the standalone to perform your music in real time. But if you want to record music then you’ll need a DAW or recording device of some kind.

The .wav files you save from within Vital are called Wavetables and are the building blocks you use to create patches. But you can use Wavetables in more than one patch so saving a bunch of them gives you a library to draw from when making new patches.