I’ve noticed some subtle issues regarding presets and even individual settings in Ableton Live.

I reported this some time ago, and I thought it was fixed around version 1.0.5, but maybe not.

Yesterday I hit an even worse issue.

This is scary. I don’t want to put 20 hours of work into a track, with 8 instances of Vital, only to have random parameters change out underneath me. Some I might notice, but others I won’t, until I start to have problems with my mix, problems that didn’t exist before, or that I had already spent time fixing.

Is it happening for VST3 or VST2? In case if you’re using VST3 I suggest to use VST2 one and check if the same issue happens.

I’m not sure how to tell once I’ve put it into a track. I put it into a rack for macro controls. Most likely I would have used VST3, thinking it meant newer/better than VST2.

I can try building future tracks with VST2. I doubt I can switch out the Vitals in this current track, because I can’t tell what presets I was using (due to the Init Preset bug), and I don’t want to spend two hours trying to identify the presets by ear (I have 8-10 vitals in this track).

I love the synth, but this is slowly becoming a big issue for me.

I’ve seen random parameters change when people have accidentally added MIDI learn to some parameter. If you right click on the control that changed (release knob?) you can “Clear MIDI Learn”.

As for the preset name loading up as “Init Preset” when reopening the UI, that should be fixed.

Selected a preset in each. I noticed that the VST version has a little preset box that shows the name of the selected preset.

Saved project, loaded another project, returned to the test project. Opened each track:

Can you make sure that both the VST and VST3 are on version 1.0.7 or later?

Thanks for so quick reply! Yeah I understand your worries. Sadly in case of vsts new doesn’t mean better - a lot of developers did not implement VST3 fully yet, and it’s not being as well tested as VST2, so it’s strongly recommended to stick to VST2 instead. Ableton added support for VST3 just recently.

In order to replace VST versions and having them work properly in older project files you will sadly have to manually save all the presets that you’ve created in synth first, and then manually replace it & load the same preset. Automations will probably also be unlinked but depending on how your DAW works you should be able to link them manually again without losing the work that you already put into them.

Wish I could help you more with it.

I opened up the vital instance in question to see if maybe I had accidentally MIDI mapped something. I right clicked on the Release knob, and I don’t hae a “Clear MIDI Learn” option, so I’m guessing that I didn’t accidentally add MIDI Learn to it. 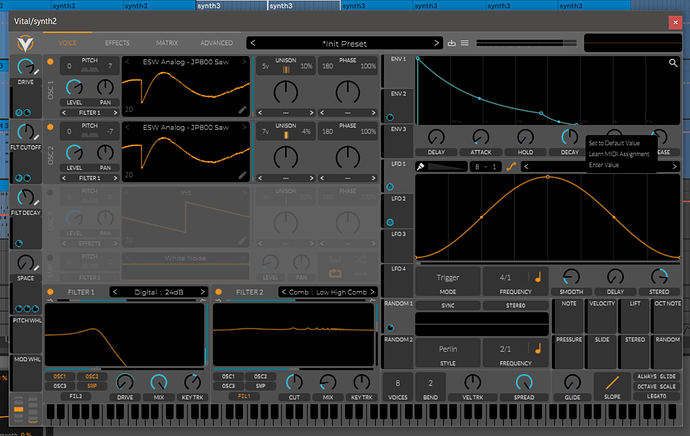 @MissViolinMelody - just asking the VST2/VST3 question was a big help, thanks! I think I’m going to use VST2 for my upcoming work and see if it behaves a little better. Thank you for your ideas.

You sure it was release on envelope 1 that was different?

Having one parameter different is most likely because of some MIDI learn setting or automation setting in the project. I’d be extremely surprised if the preset loading just had one different parameter because of a bug.

I had to go back and double-check myself. I looked at the ENV 2 shape, and I know that wasn’t the envelope I was looking at yesterday. So I’m 99% certain it was ENV 1.