It’s been quiet from Matt

Yeah, it’s strange. Small updates would give some presence of the progress.

He said on multiple occasions that he is working on a new graphic engine, which is quite a big update, so it will take some time. I reckon (as he also stated) that he will include some minor bug fixes in that new “branch” as well.

I think we all underestimate the ‘pressure’ that a dev can get into, releasing such a popular piece of software. As I understand it, Vital is basically a one man show, right?

You are right.
Never heard he is working on a new graphic engine. That’s good.

I wonder if he ever bothered to write a manual in all this time?

This synth is so easy & self explanatory that it doesn’t require any manual at all, but if you really need it here’s the one made by community: Vital Community Documentation (not an offical manual)

Matt is just busy - as mentioned before by @lokki

I think we all underestimate the ‘pressure’ that a dev can get into, releasing such a popular piece of software

So patience is key 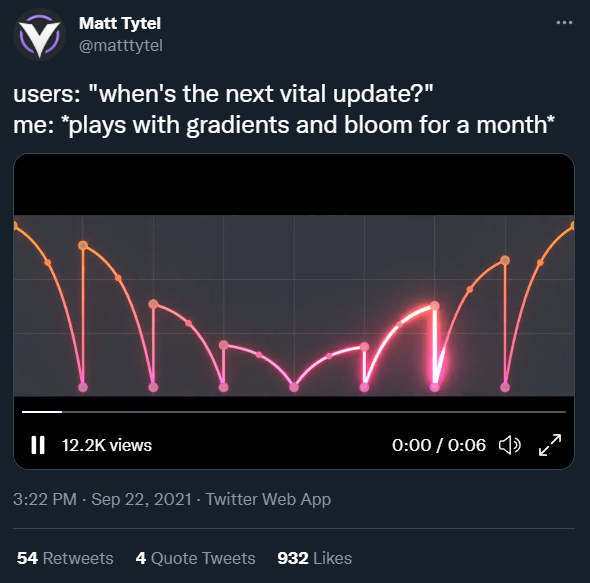 Yeah basically I realized that the biggest thing slowing development down was doing graphics/ui stuff.

As lokki mentioned I’m working on a new graphics engine. It’s a pretty large undertaking and it will mostly speed up development for me in the future because it’s a lot easier to use. As a plus it will also will let me make prettier apps and improve a bunch of general user experience stuff like window opening time, memory usage, etc.

Sounds good! And thanks for this amazing instrument.

I think people appreciate to hear a little about what’s going on with the future development of Vital. Thank you @Tytel for the update and your continuous hard work on this amazing synth. We ALL appreciate what you do and the work you put into it.

It looks awesome!! I’m sure everyone is really excited and can’t wait to try the new version. Keep working on it. All that hard work is gonna pay off in the end. So far this has been the coolest and best sounding synth I’ve ever tried!

How is it going? Any news? Hope well!

will let me make prettier apps

Ooooo … Other apps how cool would that be!

Thanks for all your amazing hard work Matt!

Will .vitalskins function the same?

It’s a new skin system but I’m going to convert as much as I can from old skins. If the skins are just color changes they’ll carry over pretty easily.
I’m removing and adding some shapes so I may reset some of the other skin values.

If you feel like you don’t have enough to do, a way to build a custom control layout (performance view) for individual/groups of presets would be really cool.

Nah was just messing around. But I guess it’s packing plenty of changes, at least under the hood, which won’t be a 2.0 for us but internally I’m pretty sure a lot of code had to be reworked.

My vote is that it’s going to be a new product altogether. Maybe Tytel is light years ahead of our expectations.