AMD to be added this month.

They’re working with Apple right now to include M1 and more recent processors.

This is going to be an absolute GAME CHANGER! 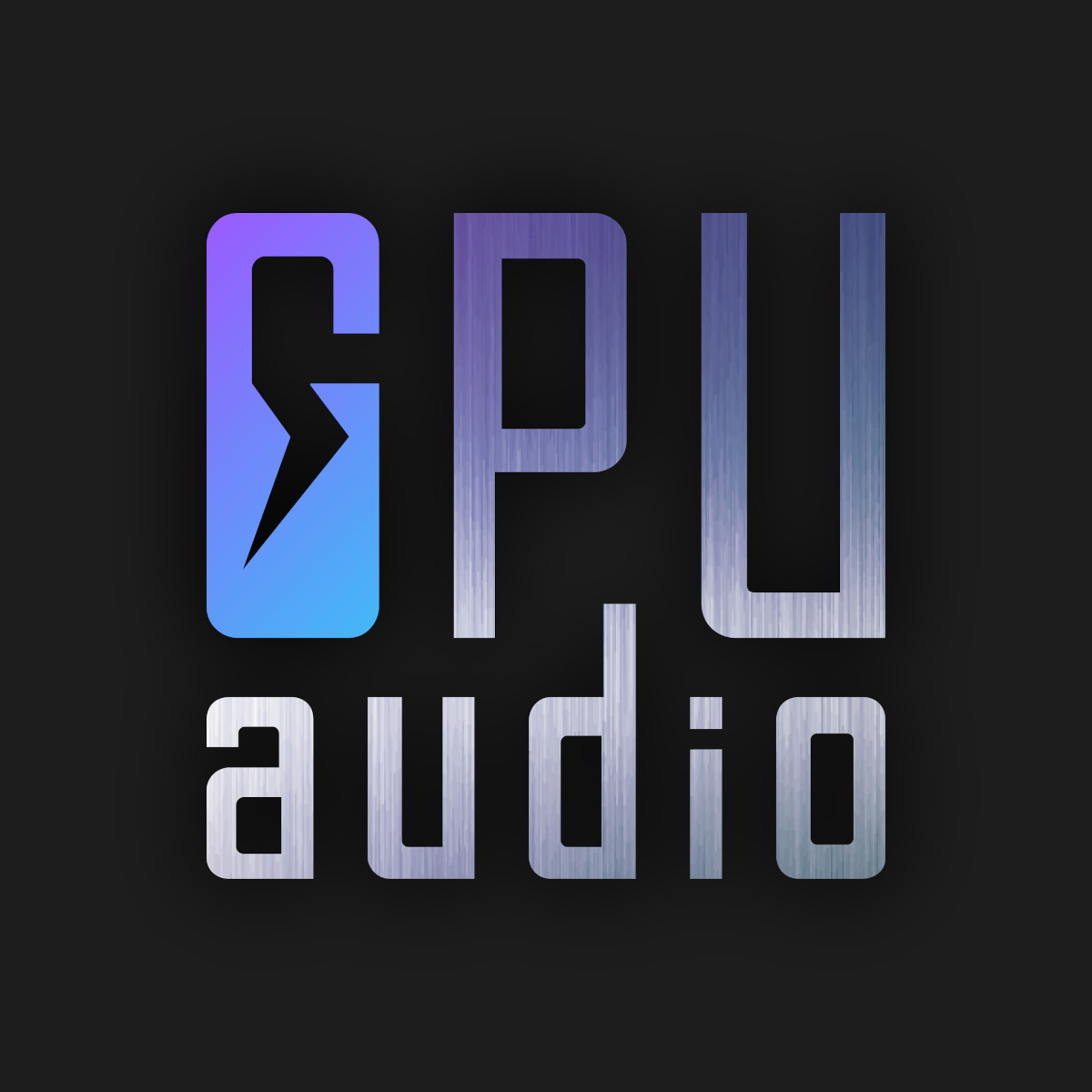 GPU Audio's Early Access program is a free community for users and developers to be part of the benchmarking process for new audio plugins and technology. GPU Audio™ is the world's only full-stack solution for powering the future of audio using the...

They say a DAW is in the making, and they welcome any interested project.

i don’t need that because instead of spending hundreds of bucks on a video card, i put those funds into my CPU. Also I don’t buy Nvidia, I would maybe buy a Radeon.

Everyone has a video card that is ALREADY faster than their CPU!

AMD (the makers of Radeon Cards) is getting supported in the next month.

Apple is working with them to get M1 and later computers to work with this technology.

So that is mainly for CLI plugins, right

Seriously though, nice technology for sure, but to us its full potential you will most likely have to buy another GPU that doesn’t do graphics at all

I recommend watching the 3min Q&A vid below…

They’re making a synth & DAW too… (they mention the Synth, but I’ve been researching and there’s a DAW in the pipeline too).

(after all, the SDK is dropping to the public really soon…!)

This is the future of audio dudes.

I wonder if this will ever work with a bog-standard laptop with an Intel or AMD built-in GPU. It seems like it should but as a hobbyist, I have no need for a seperate GPU card.

In terms of “can it work with an ‘integrated’ CPU/GPU?” (which mine also has - intel quad core i7s have this), technically this type of CPU actually has a GPU within the CPU. This is an interesting question. I am going to ask about it on their Discord…

I know nvidia, amd, and apple are working with them. I am not sure about Intel (as yet…).

But I get it - laptops can make music without separate GPUs. The reason I have one, is only because it was impossible to find a quad-core i7 without one (they are a Gamer’s CPU). I’m not a gamer myself - but I do currently offload anything I can to the GPU to save CPU usage for current audio projects …

I think it is fkn hilarious that my old laptop still supports this insanely new technology. Apple people won’t be as lucky as they are only working with GPU AUDIO company to make it work on M1s and above. Maybe there will be a hack, idk…

I was thinking about building a desktop computer with the highest spec CPU (because Vital and other plugins I love need massive CPU power), and any old GPU… but I am now appreciating that GPUs could become useful for audio production and I am waiting to see what happens.

Haven’t looked at the sdk but my understanding is that you cant just convert regular audio code over. Like on a gpu you don’t really have access to the last sample you sent out so a lot of the processing algos you can use are limited.

Might be great for some really processing intensive things and open up some possibilities but the application right now looks like it would only fit very specific use cases.

Also, let’s just keep the GPU audio stuff to this thread instead of bringing it up in other unrelated threads.

The video has just a faint whiff of vaporware hustle, but I’ll be really curious to see their first demos.

My sense is that they’re aiming to be a sort of JUCE-like middleware vendor, and that their value proposition is bridging the gap between conventional DSP development and an environment that, on the surface, doesn’t seem like it would be a good fit for audio.

I mean, when you think about it, the whole point of GPU acceleration is that it’s maximizing the number of calculations you can do in parallel to fill up a frame buffer approximately 60 times a second – while audio needs to render a frame about 1000x more frequently. I would expect that to be a less efficient use of GPU architecture, but presumably GPU Audio has figured out how to make the math work in their favor.

clearly i don’t understand why you have dropped this topic in this little forum like the hand of an angry god. like, what are we supposed to do about it? should we head over to the local airports and tell everyone about this technology and how it will save their souls?

Relax man - i just think it’s exciting! The more I watch / read - the more excited I get!

If you by “last sample you send out” mean poking around in the internals of your sound card, no you can’t do that, but if you mean accessing the last sample you produced, that’s as straightforward as on the CPU. At least for Nvidia/CUDA. Think about the Nvidia GPU as a 1024 bit wide vector unit, similar in processing features to AVX, but with way more registers where your named variables can live as well as a private managed cache (that won’t get flushed out behind your back) for keeping previous results around in an indexable way, without reaching out to main GPU memory

Multithreading CPUs (and doing it well) is still the big low hanging fruit, and that’s what CLAP is hitting at.

There is definitely something odd about the way they’re promoting and (dare I say it) marketing GPU Audio. It feels like there’s something going unsaid about a later stage monetisation strategy or something else very freemium about what’s planned.

And, why not define CPU for Audio, GPU for visual representation. The CPU isn’t doing much else other than Audio when running a DAW. And Vital shows just how much a visual representation of what’s happening, live, can completely change the sound design and editing process. I want all GPU cycles informing me, better. And the rest of my CPU cores being fully utilised.

There is definitely something odd about the way they’re promoting

yes, i dislike it. they should go to NAMM and focus on the DAW makers instead of the other way around trying to get some grass roots demand from the general public who knows nothing compared to developers. for that matter, they should start their own PC architecture company that works directly with NVIDIA and leave out intel and amd. they can be the next Apple.

You were right before, when you said you don’t understand.

i’m usually the first to admit it when i don’t understand. but it’s also important to find the pertinence in a topic in the first place.

GPU Audio, the company and its people, are making sure that everyone is talking about them, and trying to create believers, and they’ve gotten busy with patents. These three things combined tend to indicate they’re playing a long game, wherein they’ll reach into everyone’s wallets later, in ways not yet articulated.

Used to be that a recipe like this was considered a warning sign, at the very least.

If it’s not, a careful reading of their materials should be.

CLAP is open source, has been worked on for years, is being gifted to everyone, forever, and warms the cold, dead hearts of your other CPU cores, tackling the world’s lowest hanging of performance improvements, concurrency in those increasingly capable, ever more numerous, well cached and mostly stagnant other CPU cores…

Developers the size of the magical, wonder making, Vital guru - they have to make careful choices about how they spend their time, as there’s never enough of it. And CLAP works for him, in this, freeing him to spend ever more time fussing and fighting with OpenGL.

Without understanding, you’ve probably come to the better view point, already - that GPU Audio is a bit of a distraction from the easier and more integrated gains probably possible with CLAP and a jobification approach to audio.

Interestingly, CLAP’s approach, theoretically, should make it beneficial on iPhones/iPads and even Android phones, if they ever Alphabet every Google’s how to solve all their other Android audio issues, as they both have varying blends of big/small cores mostly sitting idle, too.

Been hoping someone would utilise RTX for realtime ray tracing reverbs for years now I wonder if there will ever be enough demand to ever get that.

does this new tech run VST?