Can they start adding the “yyyy_mm” to the beginning of the names of the monthly Banks in a way that will show up alphabetically in Vital’s preset browser?

As it stands currently, fishing through the various monthly banks is a scattered affair due to the names of the months/years not being alphabetical. 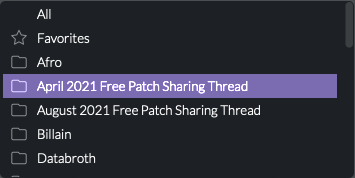 I tried to rename each of the downloaded banks with this sort of naming convention but they still show up with the original names. I’m guessing that 5 years from now the “free” list will be epic and even more unwieldy than it currently is. It’d be nice to have a naming convention in place that is more fluid workflow-wise for future Banks.

There shouldn’t be anything stopping you from renaming the banks however you prefer: can you explain exactly what you tried and how it went wrong?

Sure thing. For example with the “April 2020 Free Patch Sharing Thread” bank, once I downloaded it I then added “2020_04” to the beginning of the file name:

Mind you this was a completely fresh install of not just Vital and all sound banks, but also my entire macOS system. I had to wipe out my entire MBP and begin building my system from scratch this week (completely unrelated to Vital) and so there are no lingering old caches, preference files, etc of anything, including Vital or its sound banks. I thought this would be a good opportunity for me to make some tweaks to my Vital banks’ hierarchy in the Preset pane by coming up with a more efficient naming convention, however none of the new names stuck once imported into Vital. Bizarre yes?

I agree with the naming convention idea. Makes perfect sense that banks should be ordered by date and not alphabetically.

No, not so strange: changing the title BEFORE you import the bank won’t affect the filename. AFTER you’ve imported it into Vital, right-click on the bank in Vital’s browser and select “Open File Location”, then change the actual filename. Close and re-open Vital and the bank should have the new title.

Ok that works but I still agree with the idea that banks should be named numerically by year and month rather than by month name for the reasons stated above. The name of the bank is written into the .vitalbank file (you can see by opening it with a text editor) which is why renaming the file itself won’t work.

Thanks for the assist! That worked for what I needed: 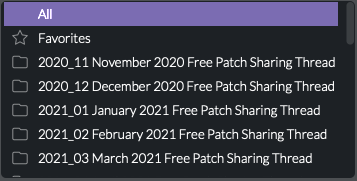 Thanks for accommodating this!

Funny seeing this post as this is what I talked to Andrew about back in March!

Just to clarify you need to change the folder name in the .vitalbank archive ( which any zip program can open as it is just a zip format after all).

Good tip! If only I had the foresight to do that in the first place

Yes @tinnitus_uk your earlier post was very much in my mind when I saw this post.
A second request for this change, plus the fact that this post provides a resource on how to manually rename previous vital banks, was what prompted me to adopt the new naming convention. Hope you’re pleased

Thanks for the effort in collating the freebies ( that is what I’m most pleased about tbh). I have a different naming convention so will continue my DIY approach ( all of 10 seconds effort)

Btw if you rename your vital bank folder after importing them, you will need to manually fix your favourites file with the new path.
As per Renaming Presets banks and retaining favourite presets