Hello, just joined the forum, Vital is an amazing product and I see a terrific positive attitude here

I have a question: is it possible to set some modulation so that every triggered note has a random pan, both for all oscillators or just selected ones?

That’s very easy to do with Vital. Use a random generator set to Sample & Hold style with the frequency set to Freeze. Route the random generator’s output to the oscillator(s) pan control, and make sure that the modulation is bipolar. The modulation amount controls how much random variation is applied. random_pan.vital (170.0 KB)

If you want something that generates a random value with every note press and keeps it, just connect the random label in the lower right corner to whatever you want to modulate, in this case panning.

so that every triggered note has a random pan,

The Random function mentioned is good, but, you can take it further by having items in the random modulation themselves be modulated by, for example, another LFO. So, for example, you set the Random to modulate Pan, and then, drag an LFO to modulate the Rate of the Random generator.

It can get complex, but give it a little time and you’ll work out how that works. When you stack one modulator on top of the other you get a little dot inside circle of the first modulator.

The Modulation Matrix is often the best way to edit these values.

Thanks! This is it!

Pity there’s not an official manual, but I already found Hookline’s one and it was very useful.

Next difficult question now, I’m trying to do that but maybe I’m missing something again about modulators power: how to have every other note panned the same (even ones hard left, odd ones hard right for example)?

how to have every other note panned the same (even ones hard left, odd ones hard right for example)?

This is a basic example. Vital allows much more complex set-ups where Modulation A is itself Modulated by another source, typically another LFO. There’s also the “Modulation Remap” feature which is found on the Matrix Page. I have some questions about Mod Remap, but its use is somewhat intuitive. 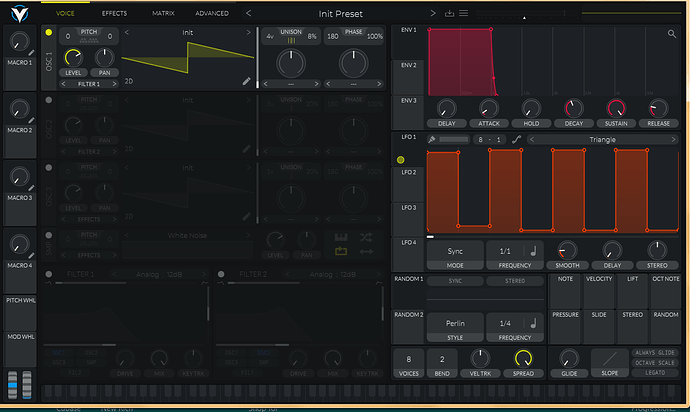 I see but if I understand well in this example you’re modulating tempo based, not to every note triggered, or am I missing something?
By the way, which skin is in your picture? I bought the pro pack skin but it seems it’s not one of those, I quite like the warm colors used for the wave, env and lfo diagrams. Is that a custom skin?
Thanks!

How would you decide which note is even and which is odd? Should it reset after a given time? What if you play a phrase with some rests in it? This sort of thing is best done via automation from a DAW…

Well, on other synths there’s an “alternate gate” bipolar modulation source that switches between -1 and 1 at every note triggered…maybe there was something similar in Vital also; just asking

Ok. Makes sense. So it just flips state at each note coming in? Regardless of any pause or similar… I don’t know of a direct way to do that in vital, but maybe with some clever Modulation matrix wizardry…

Exactly. It would be quite a useful source…

Well, on other synths there’s an “alternate gate” bipolar modulation source that switches between -1 and 1 at every note triggered…maybe there was something similar in Vital also; just asking

I don’t know of how this might be accomplished in Vital. Perhaps someone will be able to work it out.

I’d have to use an the Input Transformer of my DAW (Cubase Pro 10) to get a setup like this work. It’s an interesting concept.

The Skin Sharing Thread is where I picked up the skin called “Colors.” Skins are kept in the documents folder for Vital.

Thanks, I was going to try customizing the skin myself but it’s quite challenging to understand which skin item color affects which GUI element. I will try the thread you mentioned.

I was just trying the “Oct/Note” function on the lower right of Vital’s GUI and assigning that to Pan. I don’t have it working with exact precision but I think there may be a way to use that to achieve the alternate note panning.

But if you play the same note repeatedly, the panning will be the same each time…

You have to put the LFO into Bipolar mode. I’m not satisfied I have this right and I’m not sure Vital can do what was asked for the original post. Maybe someone will be able to work it out for inside of a single instances of Vital. Perhaps we need two oscillators?