I’m currently working on a program to easily look into the basic data (name, style, ect.) of single or batch preset files and change it. What are some features you would like to see in it?

I’m trying to make the workflow as simple, fast, and easy as possible. What are some features you would like to see?

Happy to see this project going on!

I’d personally really love to have an option to do it in bulk by selecting few presets then setting up their name, prefix, description etc then pressing UPDATE, or similar workflow. This would really make that tool useful & comfortable to use.

Other than that I think that it would be cool to have an option to sort out & look through presets - by name, style, string it contains etc. Generally some kind of database-like UI (if you’re even planning it to have UI) that allows you to quickly search through all presets and update them in bulk.

Sorting them might be technically challenging, but I’ll see what I can do. 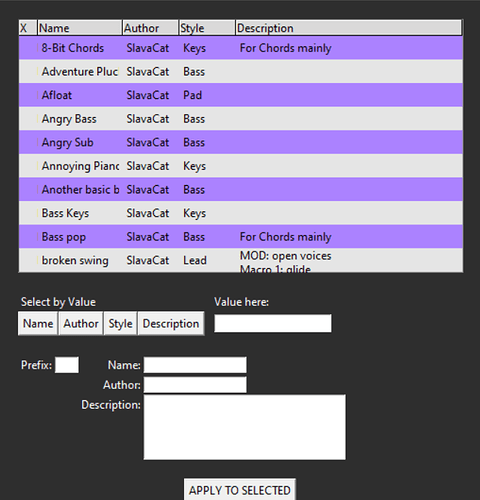 So far looks good as a prototype UI

I was thinking and there are few questions appearing in my head related to how it’ll work and what potential issues can and probably will occur & how we can prevent them:

), these are just thoughts that don’t need to define where the editor has to go or aim since every user will have own suggestions & idea on how it should be working, but I think & hope these questions can help define how things can work in most comfortable way & point out potential problems you can run into while working on it. ^.^

Good luck and keep me updated!

For prefixes, I have a system that will look and see if there is an underscore before the name and It will separate it:

I haven’t implemented removing it from the Name yet.
For people who want to have a space instead of an underscore, there will be a checkbox.
I might also add in a entry box where you can enter your custom separation character, which would remove the need for a checkbox.

For style types, I just forgot to add in the field lol. I also plan to let users create and save custom styles, as well as prefixes, to a json file which can be accessed by by a dropdown menu on the side. The json will come with the defaults prelisted.

For Input fields, it will apply the changes to every selected preset. I will add in checkboxes to the side of each entry if you want to exclude it from mass editing. I also plan on adding a smaller chart view to let you select individual presets from your selection to edit.

Unfortunately with all this stuff, it’s going to take several weeks to finish this and give it a fluid workflow. I appreciate the feedback!

Sounds good! And yeah, there’s more things to be implemented than it looked like at beginning (as always with anything in programming

) so again good luck with everything and I’m looking forward to it! 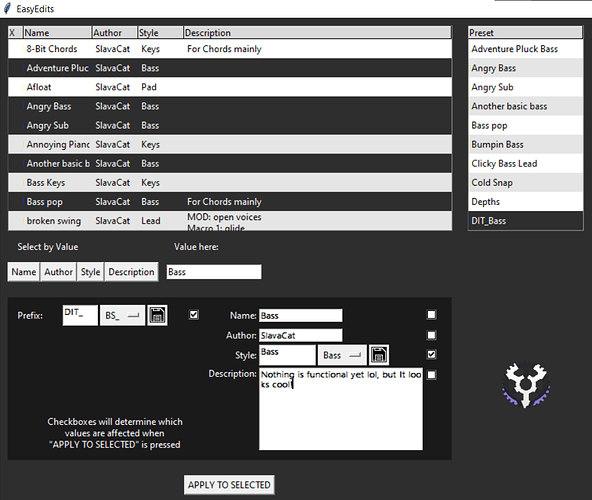 Nothing is functional yet lol

Unless anyone has any suggestions, this will likely be the final GUI layout: 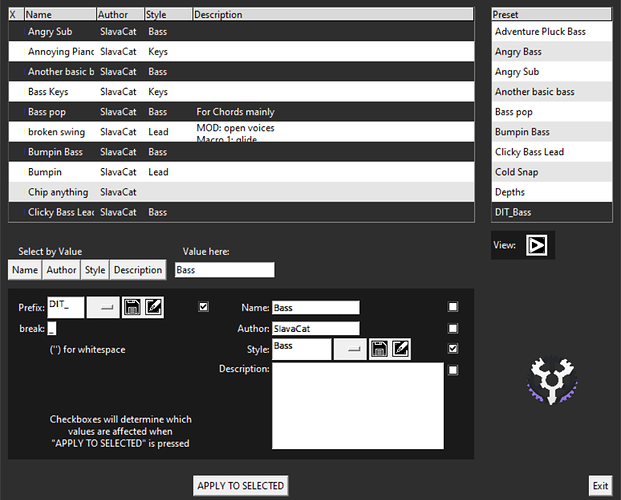 ) will open up a subscreen to edit you custom prefixes and styles: 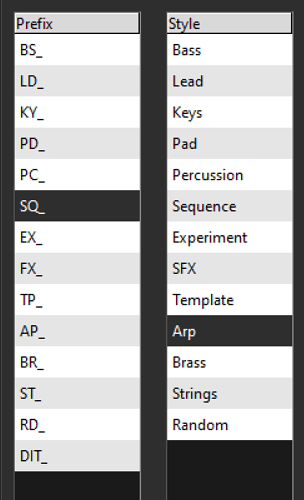 As said before, this should be the final GUI layout. Once I figure out how to update the dropdowns, all that’s left is to get actual functionality. Depending on how much school work I have, this should be functional, finished, and released by the end of the week.

Looks really good to me!

Thank you for updating me about this project!

I only have few questions, why are there 2 menus for presets (left and right one)? What is the purpose of the 2nd one? I think you should limit yourself to using only one for this (if 2nd one is just to select single presets then the left table has that ability too).

Other than that it probably looks okay, hard to tell until tested. I only worry about it containing a lot of things on screen which can look bit tricky to understand.

You could probably replace the checkboxes next to fields with just a simple code that checks if field contains string, if it’s null then it doesn’t update the field - that way you will be able to get rid of some elements from UI that introduce some “noise” to it’s readability.

Does the “view” button open preset? Sounds like cool thing to have ^.^
I like that there are separate submenus for definitions of prefixes and styles.

The second submenu is used to select within the selection of the first menu. I did this because when you’re selecting things, it can get really spaced out and hard to manage. This system makes it easier by condensing your selection, sort of like a puedo sort feature.

It might be easier to demonstrate in a video, but this workflow is much easier than what I had before, especially when working with a large amount of presets.

And for the checkboxes, when you click on a preset, the info is automatically sent to the edit boxes. So if I was checking for a string, that would get really hard and confusing really fast.

I’ll post a video of the UI in action later and hopefully a lot of things will be easier to see/understand.
You might want to check my previous update as well: Easy basic Vital data editor, taking requests!

I like what you’re doing and it will be a great addition to patch management in Vital.

The Patch Saving system in Omnisphere is a good model for what I’d like in Vital, but extra fields and sorting options will give us a much better workflow with the instrument.

No specific suggestions. I think you’re on the right track and know what’s needed.

P.S. I do have request. Not sure if it’s part of what you’re trying to accomplish. Is an Audion Note possible?

You select a patch and a note is played (the note and its velocity should be able to be set).

That explains a lot, thanks for the answer

I don’t know how that would work, but there is a view button that will launch vital with the currently selected patch.

Eat your heart out serum.lol

Here’s the video on how the double menu works: https://www.youtube.com/watch?v=cQm5EliqVeg

Ok I swear this is the final GUI update and I am working on functionality now,

If everything goes smoothly, this should be out before Monday. If it doesn’t go so smoothly, next week should be enough time.

Ok there is still a ton of stuff left to do, and things aren’t going smoothly. Expect this to be out next week, sorry

Take your time and don’t worry even if it takes a month or two - dev stuff can be tricky sometimes ^.^