Does anyone notice some distortion going on with the filter?

this is my first day using Vital. I’ve noticed after turning on the filter (on digital 24) on a standard saw wave, there’s noticeable distortion audible in the lower end when i play a chord. The distortion knob is all the way down as well. Am I going crazy or is this something that’s just a part of the built-in filter effect?

Nah I checked it out and you’re not crazy. I didn’t notice it with Filter1, but in the FX filter:

You can see some weird partials creeping in underneath the fundamentals in the 2nd screenshot (that’s with FX filter on).

Ahh, gotcha. I guess the solution for the time being is to use an external filter in my DAW. Thanks for checking!

I think it’s normal, the filter have a drive build in for the analog emulation, normal. But, if you use the filter into the effects section, all you voices are sum to the effect. You could try lowering your level before fx or place your filter fx after the compressor.
I like playing a chord into a drive fx or a distortion. Per voices,polyphonic sound ok, on fx, monophonic, it sound garbage. I can sounds great if it’s very subtle!
Best
YY

I asked around internally in the beta group about this. This is normal and expected behavior, and happens in other synths too. For example, see the screenshots from Serum just below, performing exactly this same test.

The difference is that in the Voice page, the two filters there are applied per (note) voice. So if you play a triad chord, that filter is being individually applied to each note in the triad, and then the three voices are summed together. But when you instead use the same exact filter in the FX section, it’s only acting a single time on all three voices already summed together beforehand. So now it’s trying to filter three different fundamentals (and their harmonics) together, and so you start seeing intermodulation.

Here’s a screenshot of a basic Saw wave in Serum played as a triad, with NO filters.

Now here’s that same triad running through a Low24 filter at 425 Hz in the OSC tab. So the filter is happening three times, individually on each note voice, and then the three voices are summed on the output. 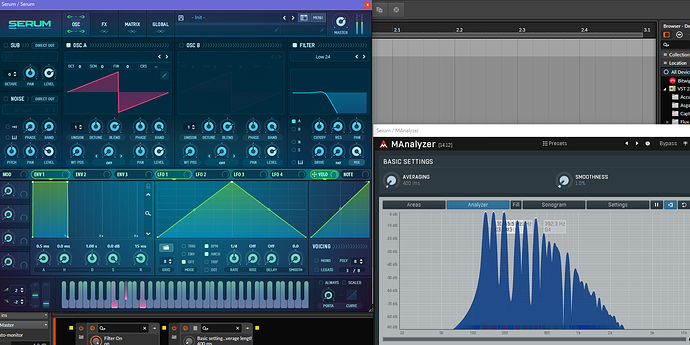 Finally, here’s the same triad running through a single Filter all together in the FX section. So you get lots of intermodulation.

Hi, I have some problems also with distortion inside Vital.
I made a patch (saw wave based), and replaying a repeated quantized four note chord I have distortion on some of the chords, even they are the same chords.
No matter how low I set the oscillator volume it is the same distortion I hear
I am at work now, but will later today post a link to audio example, patch and midi file, if someone will try it out, but I prefer if it is Matt

It is a really strange…