Can you make "interesting" generative music in Vital?

this is like my second attempt, and the first I kinda liked, hope you like it as well.

How did it happen to be that big? I’ve never seen an over 7MB Vital patch, isn’t that triangle sample a little too big?
Nice work, but somehow, a lot of it is quite deterministic, the phase and frequency of LFOs and random generators is fixed; one of the “points” somehow in generative music is making the whole thing as non repetitive as possible, finding a way to make it you know… surprising, even for who made it; it somehow requires to “manufacture” unlikely events, which with Vital and its mod remapping feature is quite easy to do.

Here’s the one in the video surprisingly synced Krell.vital (889.3 KB) A bit smaller somehow

Cool, as i make generative music, I made several generative patchs, of course Vital is great for that, 12 lfo, a modulation matrix very effective, all the curves customisable, its perfect.
I’ll upload when the 1.5.1 will be out, of course the new options on oscillators allow many sound variations.

Yeah it was just a quick experiment, and as for the triangle sample, it was the only tonal thing I had in my samples folder.

interesting,
but from my point of view, these are random things, not generative.
no passage goes anywhere just a lot of random stuff.
Maybe I just have a different opinion about self-generative music.
Of course, I’m not bashing it, I’d just use the word random and not generative.
I would like to know your view on the “generative vs random” thing.
thanks

Well the concept of generative art is clearly subject to different interpretation; the point is imho about at what level we expect the randomness or somehow non periodic input to take its effect , even this could be considered to be generative music

so, deciding what level of organization is allowed at “low level” and equally how much organization and coherent evolution we expect in something claiming to be generative isn’t imho trivial. I have to say, having spent a few hours in the “light paintings” installation by Brian Eno, that in all likelyhood, his own process isn’t a lot more deterministic than this, so I felt I could use the term “generative” with no further worries. In this case anyway, I was just trying to make something akin to the Krell patch, but with a clock and you know… a bit more timbral variety

BTW, Here is a tutorial explaining somehow the “process” I used for making a patch like it,

if new notes could be created within the synth, or if one of the gui-keyboard keys could be held down like in vsthost.

I don’t quite get what you mean. Of course having something that generates new notes completely changes the playing field

I think the idea is so that you wouldn’t need to hold down a key on your controller in order for the patch to continue. This is similar to some users who have difficulty with the idea of Env1 being hard-wired to VCA but it’s not really a concept much indulged in outside of the modular world, where these sort of generative constructions thrive.

my point also.
fact is, I was trying to make something generative only with Vital, and it isn’t, by design a modular synth, so that option was not available anyway

For what it’s worth, I’ve really enjoyed both patches you’ve posted here. I put a paperweight on my keyboard and listened to both of them (in the background) for hours! They’re certainly categorisable as “interesting” even if some don’t find them entertaining. And, as you say, to have created them on a “regular” synth (rather than a modular system) is quite an achievement. It also shows off some of the unexpected possibilities available from Vital’s semi-modular set-up.
Thanks!

amazing sounds and patches as always from Platipo

thanks for the great job

Generation 01.vital (1.4 MB)
Inspired me to have a shot at it and made this thing in about 20 minutes. The deep modulation makes it really easy indeed. Don’t even need mod remapping, you can just chain a few mods to get something that triggers essentially only if multiple modulations have a high value, which really enchances the random aspect of it. You can quite literally have something trigger once in a few years.

Very nice work here. It has a very different flavour from mine, as it is more of a continuous flow of sound rather than disconnected consecutive events, but it really works, is nice to listen to, worth putting a weight on a key and listen for a while. As soon as I have some time to do so, I’ll dig a bit into properly understanding it, thanks

Well, thanks, I almost forgot about it. Might share another one when I can.
The continuous flow of it comes mostly from using mod remapping rather sparingly, which leaves few ways to create those events. In general I did it because I wanted more of a pad but both approaches can make equally interesting stuff.
Also a little tip (that works for me on Windows at least), if you are in the standalone you can just press a key, click outside of the Vital window to switch focus and keep the key kind of suspended, then release the key and go back to Vital. It stays this way as long as you don’t use the keyboard (while focused on Vital) and removes the need for a weight, even while editing. Additionally allows to easily leave it in the background while doing other things.

First post in Vital Discourse, and this seems like the most relevant place to mention my stuff. I’ve used Vital during a run of some 50 generative ambient YouTube music live streams this year, using Gig Performer as a VST host.

It’s a bit of a shaggy dog story at this point but this recaps:

In April of this year I established a practice of building several ambient generative Gig Performer rigs per week, and live streaming the results on YouTube. Always starting from a blank document was my way of accomplishing some type of education and...

Long story short if you’d like to ask me questions in chat theres a YouTube premiere this Thursday Oct 20 with live chat: 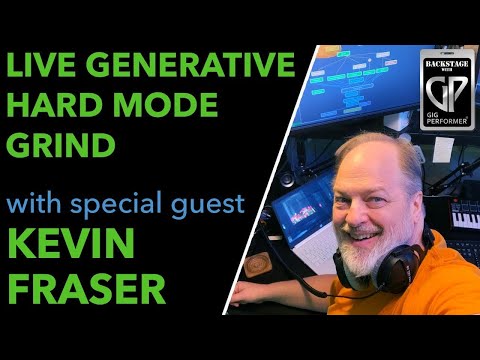 You’ll hear my wacky story and have me available in chat. I don’t work for any VST dev, I’m just an independent madman who likes using Vital in my live streamed generative pieces. Hope to maybe make some new friends there!

Now this is really interesting… Never heard of gig performer before, I’ll definitely have to get into it.

Far out! YouTube premiere with live chat Tomorrow 1630UTC 1130ET 0830PT at the link I posted. Bring lots of friends! The more people know about Gig Performer the better.