Can Preset Folders Be Nested Into A Single Folder?

I have one guy that issues a lot of content. I’d like each .vitalbank he issues to be in a uniquely named folder … and those folders to be nested into a single folder. Is that possible and if so how so?

uhm…at least on the mac, you can, afaik, structure it as you wish (in the finder)
i.e.: with any subfolders you like

but, afaik .vitalbank is just a zip container and cannot be used by vital directly but has to be imported, whereas it gets unziped and unfolded into another folder…

Been manually fiddling with it. Neither of the following two folder structures worked. Hope it makes sense.

The objective is just to tidy up the Vital preset browser by locating the presets from prolific developers under a nested folder structure.

1st example does not work here either

p.s.:
within the presetbrowser you have to click on the Signs parent folder twice to reveal any subfolders

pps:
as said before, afaik vital only directly reads presets, aka .vital files not .vitalbank files which have to be imported

p.s.:
on the mac (finder) the structure (that works) looks like that (within the default vital folder 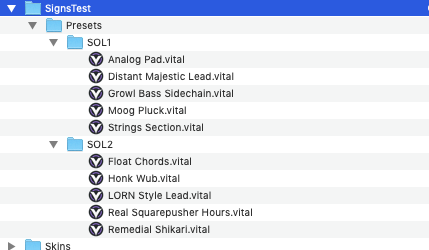 I’ve got it working now … I didn’t know about the double click thing.

Should come in useful … I have 12 sets of presets from the same developer.

Thanks for the help! muki!