Let’s say I’m creating a new preset, and deciding that ELZURIX made that preset, and then I want to make a new preset, and there I’m deciding that Martin Garrix made the preset, I want that to show up as different folders so instead of showing all of the presets under the folder “user” I would rather that it’ll show up under ELZURIX or Martin
The main reason why I want to create folders, is to categorize different genres like house dubstep and such and I want each to be its own category that I would be able to filter, to only see the presets that are relevant to the current genre that I’m making.
This is the simplest way I think that would enable users to filter presets by genre, but I also have another idea:
Basically, to add a box that in there you can set the “genre” of your preset, and you can also implement a genre filter, that would be a lot better imo, but maybe a little more time-consuming 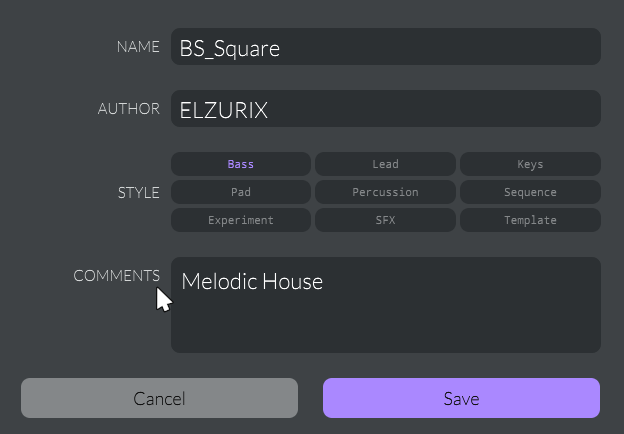 Currently the workaround is just to manually move presets to custom made folders (it’s what I do all the time). You can even setup batch script for that ^.^
Vital supports subfolders too btw

But I agree that it would be cool to eventually make Vital change it’s default save folder to different on the fly (so you can pick where preset will be saved when you just save it), not that it is really important feature but it could indeed save few additional seconds ^.^

Yeah actually folder path would be a better solution because it might be that some people prefer to organize projects based on other things, so something like a “subcategory” field, to just be the name of the folder that it’ll be saved in or just “path” and there you can write the absolute path, I think the second option is easier to implement so I would say it is better, but yeah I would love to see that implemented, for now I’ll the manual way of doing it, thanks