Just got a seemingly random UI glitch in Ardour - I loaded the LV2 plugin in a new track, and suddenly there are black boxes all over the screen. Mousing over some of these made them update so that they look as expected. However, most of them would not update at all, which made the synth pretty hard to use (at least for a beginner 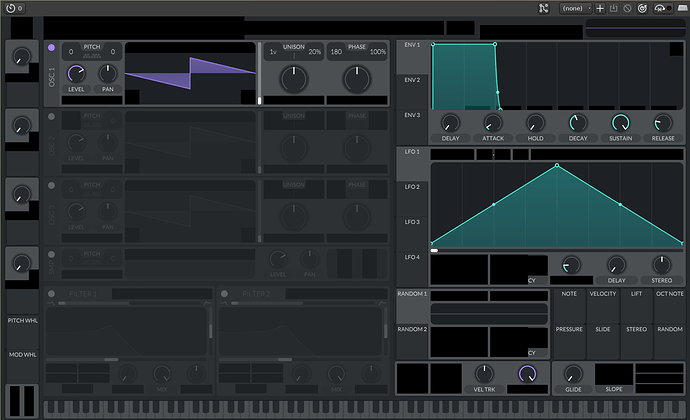 Reopening the UI and re-instantiating the plugin did not make a difference, the problem only went away after restarting Ardour. The next launch appeared to work fine, so it seems like a transient issue.

I’ve noticed that it is actually possible to redraw the entire screen, including the blacked out areas, by changing the UI scale. However, both before and after this workaround, some interactions with the synth (e.g. selecting a different envelope) cause the plugin to segfault.

Graphics card and drivers are possibly relevant here as well. I’m using the amdgpu stack with a Vega 56 card.

Also tested this in Zrythm, and I get the same behavior. I suspect it’s LV2-specific.