Hi, I’m trying to make a Alternate Left/Right pan modulation that’s triggered by each key press. So basically every key makes the note play left and the next key right, etc.

I’ve managed something similar by using the random function but obviously, it’s random, not alternating.

So like an incremental lfo? Thats an interesting idea, I’m not sure of anyway to achieve it in the current version of vital.

It’s something that comes from old samplers like the Roland S760 for example, and that plug-ins like TAL Sampler have implemented. It’s called “Alternate” and basically just goes back and forth between two positions by a set amount bipolarly (I don’t know if that exists) plus and minus around the knob position. Most commonly used on panning and triggered by each new note played, alternating the panning of each voice (or one voice if you are playing a monophonic patch) between the left and right channel. But could be used for anything really… it would be similar to the “Stereo” modulator in Vital except instead of offsetting it alternates. At the moment I do it with the “Random” modulator assigned to the pan but obviously as it’s “random” it doesn’t alternate between left and right and sometimes still falls in the middle. Does this make sense ?

I’m not sure if there’s any way to generate your alternating from note to note. However, if you use the RAND feature (on the bottom right - NOT the RAND 1, 2, etc.) set to bipolar and affecting the OSC PAN, then use the MATRIX to create a 50% left, 50% right shape, you can at least have your key-presses generate a random selection that’s either hard left or hard right.

An alternating LFO with a second one modulating it’s phase slider maybe? In combination with the mod matrix as described above, might be the closest we can get atm

I didn’t know you can “force” the random to a certain position. I will try that for now but will definitely post this in the feature request as it doesn’t seem difficult to implement.

Vital 1.5 actually added this feature! In sync options there’s a new “point cycle” mode that goes from point to point on each new key press: 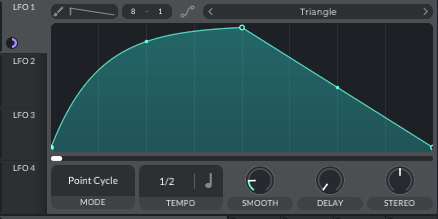