I would like a step sequencer with 16-32 steps for VITAL. Then I can create my sequences directly in VITAL and don’t have to switch to the DAW. This simplifies the workflow many times over.

if there was some kind of latch mode where you hold down a note indefinitely, you could probably use the LFOs as step sequencers with a chromatic grid and paintbrush. but until then, we can use a midi keyboard and hold down a note with tape, or put something heavy on the key. I guess you’re using the standalone but might as well use one of those vst host programs for live situations and a dedicated sequencer plugin for now.

you could actually use an LFO as step sequenzer
for example:
LFO 2 mapped to pitch of OSC
and as pattern use for example factory > split gate

Many synths have built in Step Sequencers. They allow you to create patches with melodic sequences to use later in compositions: 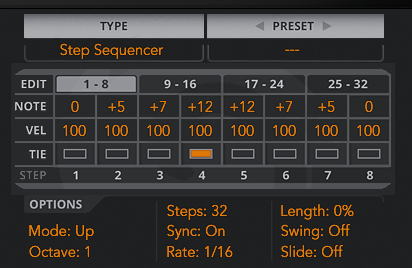 You can duplicate the same thing shown above in Vital:

But yes I’d like to see a dedicated Step Sequencer and a traditional Arp module added to Vital at some point.

yes, but :
afaik it doesn’t really re-trigger the envelope
(which a dedicated sequenzer would do…)
(maybe i’m missing something here?)

f.e.:
u-he hive or repro-1 triggers the ENV with every step
can’t see a way to do this in vital (with LFO)

Re-triggers here at note on. Each step doesn’t re-trigger.

You can configure a second LFO to customise the envelope for each step (or just to loop an envelope shape at a rate that matches your pitch LFO).

hmmm…sorry for my ignorance, but how?

do you have an example?

the only way i found, was, that the 2nd LFO (the 2nd LFO’s shape to be precise) modulates the OSC-Level or the overall volume
whereas the LFO’s shape acts as envelope shape
but…kind of cumbersome imho
syncing, LFO1 with LFO2 isn’t really fun and…well…

as with tek’s example, this method can’t reflect the middle note/step-hold
probably i’m doing something wrong…

btw,
imho LFO frequency setting in “Tempo” mode is way too sensitive with an apple trackpad 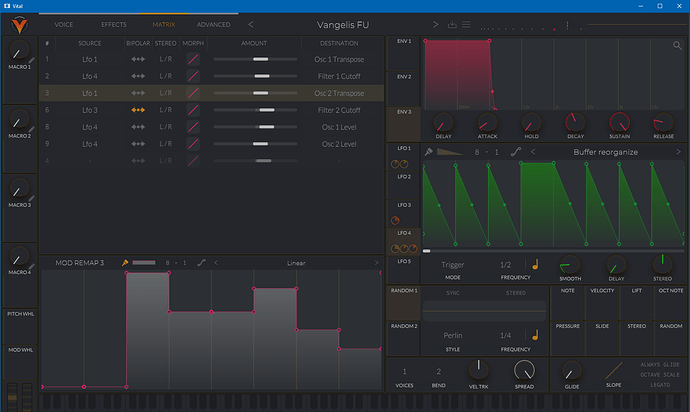 yes it does
still, imho, a dedicated stepseq would be easier to setup

a dedicated stepseq would be easier to setup

another idea:
a way, that the (individual) steps of the LFO trigger ENV
maybe via a threshold setting or alike…

btw,
imho LFO frequency setting in “Tempo” mode is way too sensitive with an apple trackpad

three-finger-drag does the job - i.e.: slows down input/valuechange
cmd-threefingerdrag even slows ist down even more

I could see the value in having a sequencer in Vital if it is something like the one in Pigments. There it’s not just the standard features, you can do a lot of randomization and modulation of the sequencer parameters itself.
Maybe that would also be more of a “Pro” feature of the synth. Although as a side note: It would be really great if all Vital patches work on all vital variants (free, plus, pro).

Pigments can send it’s Arp/Seq data out so you can use it to drive Vital.

A dedicated and comfy sequencer and arp would a logical step to Vital. 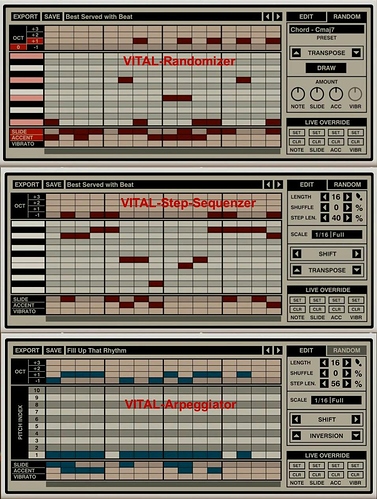 a camel is a horse designed by a committee

i think that it’s realistic that someday an arp can be added as an LFO mode. there’s a lot of ways to make an arp though. i’m not really a fan of the step sequencer style arp, like blue arp for example. they are hard to remember how to use them. i’d rather just do that step sequence in the piano roll and write an arpeggio in midi. what i am a fan of however is the old fruity loops arpeggiator or any of the old fashioned algorithmic style arpeggiators found in old synths.

but in wavetable synths, the entire life cycle of a synth sound can be made into a table and arped in the way described a few posts above, although they require two LFOs to really do the job, one for the note value and one for the envelope pattern.

so it’s just easier to do the step sequence in a midi clip. but also the possibility to re-trigger the main envelopes inside vital would be an earth shattering game changer for things like generative and arps.